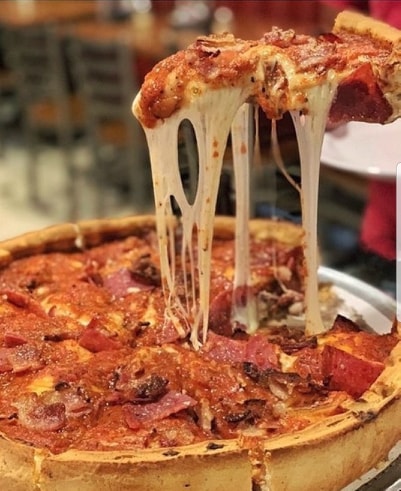 We Winter Parkers are notorious for not traveling outside of la bubble.  Most of us aren’t fans of traffic.  And, yeah, we have most of what we need right here in our own little hood.

Lots of me LUVs that.

But in the last few years, admittedly, I have found myself being more tempted by fun & tastiness not in my own backyard.  The temptations have increased exponentially in the last decade across Orlando . . . . with my own desire to go splorin’ increasing right along with them.

Friday night something stoked a long unsatisfied LUV of deep-dish pizza in us and we considered driving far south to check out Giordano’s Pizza down near the attractions.  Long ago, when we lived in Atlanta, we LUVed a deep-dish pizza restaurant called The Upper Crust.  It was yummy!

The rains ended up keeping us closer to home.  But as fate would have it, @GiordanosFlorida coincidentally began following me on Instagram later that night.  What?  This was truly fate and likely led to the cravings returning Saturday evening in full force.  Now, they would not be denied.  Off we went!

The Giordano’s Pizza we visited is in the Lake Buena Vista / Disney Springs area at 12151 S. Apopka Vineland Road.  Raining again as we headed out, traffic was light and we got there in record time.  A positive start!

As we sat perusing the menu, we began a conversation with the young couple from Arkansas at the table next to us.  They’d just arrived in Orlando with their two kids, a boy almost 8 and a girl almost 4.  They are here for a week of Mickey & friends, and were open to insights from the two Winter Park bubble bursters.

We gave them pointers on various things to do and see, apologized if they have less than desirable weather, suggested focusing on the mornings and early afternoons for the outdoor activities.  The husband is a mailman, so he’s obviously good with the whole rain . . . . snow, sleet, hail thing.  Not sure about the rest of the fam.

They talked of visiting Orlando back before they got married over a decade ago, how much it has changed.  Yes, don’t we know it!

Living in Winter Park, we often tell people how easy it is to forget that Mickey & Minnie, Goofy & Donald Duck, all that Harry Potter stuff, is not so far too our south.  More than a bit amazing to live in such close proximity to these places globally associated with fun & family, where so many memories which will be cherished for lifetimes are made.  Yep, a record 75 million global visitors made their way to Orlando last year!

As I thought of that, it was that much more interesting to me that we were sitting in a business which had brought Chicago’s favorite pizza to Mickey’s doorstep.  So many millions headed to our little slice of Florida from points elsewhere . . . . delicious slices of American favorites from other cities here for them to enjoy. Quite hospitable of us!

Before we spoke with our visitors from Arkansas, as we were being seated at our table, actually, we noticed their pizza.  It was hard not to.  My life partner pointed to it and said simply: “THAT is a medium.”

Oy!  We typically go for a large pizza to split, and maybe even an extra-large if we’re really hungry and they run on the smaller side.  But upon seeing THIS medium, going bigger wasn’t an option.  I immediately began to envision the tastiness likely to await me in our fridge at home.

We sat and ordered two large Stella Artois from our delightful server, Walter.  After considering the yummy possibilities a bit more, we decided to go with the Chicago Special, and a garden salad.  A deep-dish pizza is somewhat like a pizza upon a pizza upon a pizza.  Three, and maybe even four levels.  A simpler salad seemed the right approach.  And with its citrus infused dressing, it was delicious.

As we waited for our pizza, I took a trip to the restroom.  The walk to the back highlighted the large number of LARGE parties which visit Giordano’s.  This is definitely a pizza style ready to easily feed a group.  And groups, including large families visiting from out of town, were there.

When our medium showed up, our server, Walter, tried to help me get a great iconic shot of an individual slice being removed, the mozzarella stringing below.  I failed, am falling back on one of their amazing shots here for the featured shot.  It is such an enticing moment, yes, it deserves a great tribute photo.

Our Chicago Special was AMAZING.  And the cheese, the vegetables, the crust, it is no wonder this amazing style of pizza led to cravings a few decades after the fact.  Truly, this slice of Chicago in Orlando was a delicious reason to venture outside our usual habitat. And our yummy pizza at Giordano’s did not disappoint!

THANK YOU, Giordano’s Pizza, for helping prove my memories of great, yummy deep-dish pizza were not a mirage and, yes, possible in present-day Orlando!

Thank you also to our awesome server, Walter, manager, Marsha (Marsha Marsha), who we spoke to during our visit.