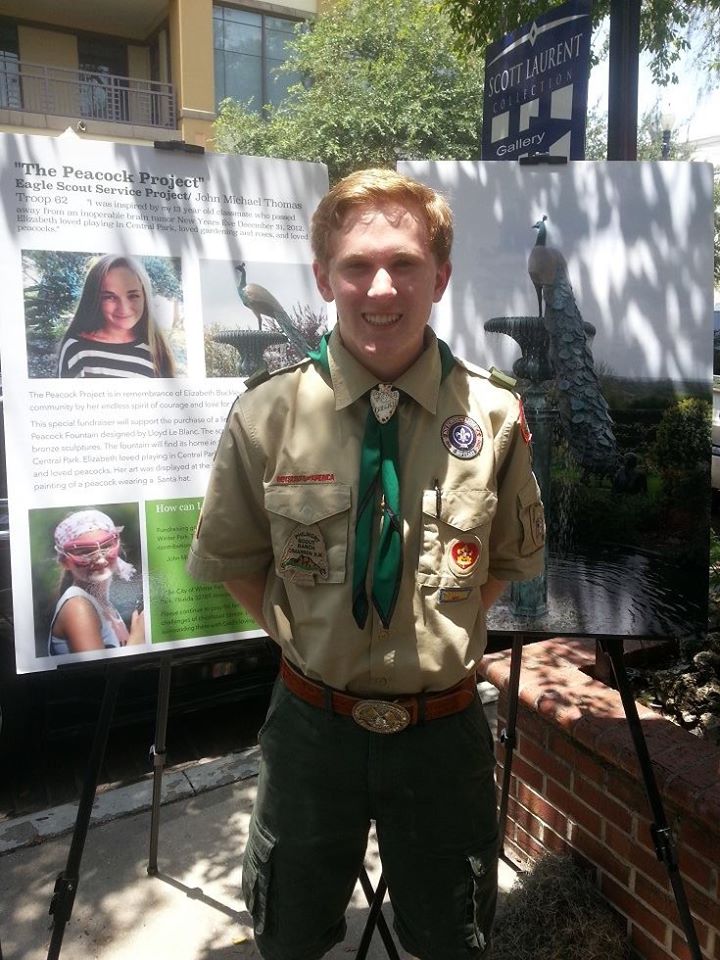 Talking with my life partner last night, I remarked to him that the people here, residents in Winter Park and Orlando, they (YOU) are as nice as any people I have ever had the privilege to call friends and neighbors. We both came from southern towns, lived around people commonly thought of as friendly & polite. Those we live around now rival any other area in both those categories.

As well, there is a since of community here, pride in it, a connectivity which surely surpasses any other community I have lived. It is these characteristics, I believe, which produce new generations of Locals who don’t just mouth the words, but truly care about one another. And they demonstrate it.

Below is something I wrote on Facebook five years ago. For it was five years ago today that one young Local, John Michael Thomas, paid the LUVliest of tributes to another, his Saint Margaret Mary classmate, Elizabeth Buckley.

Young Elizabeth was lost way too early in life. Yet, most of us will leave this earth never having left the awesome, beautiful impact she obviously did upon others, including John Michael Thomas.

The summer after I wrote this, I was invited to attend John Michael’s Eagle Project pinning ceremony and was amazed to find myself leaving with one of the pins he was given to offer to those who had a significant role in helping him achieve his goal, raising around $60,000 to purchase, ship and install the fountain. As long as I live, no matter any award I may receive, I cannot imagine it possible to surpass what receiving this pin meant to me, forever being tied to something so amazingly beautiful.

Winter Park, you are one fortunate, LUVly, and wonderful place to live, filled with so many truly exceptional people.

God bless John Michael and his family, Elizabeth and her family.

We are all blessed by there existence and example.

Around this time each year Time magazine selects a ‘Person of the Year’ to grace its cover and write about. If Winter Park had such a tradition, without question, this year that person would be John Michael Thomas.

I met John Michael back in June. He was walking Park Avenue with another Boy Scout, visiting business owners and asking if they would put his poster for The Peacock Project in their window. Sometimes I get lucky, being in the right place at the right time. It was certainly true that day. I began helping to get the word out, often with a ringside seat for updates and developments of The Peacock Project.

As we get older, I find there are certain shocks to our system . . . our perspectives . . . how we see the world. There’s that time when your contemporaries begin getting married, then having children. There’s the day you visit a doctor who is younger than you, vote for office holders who are younger as well. I have a new one to add to that list . . . . the day I realized someone several decades my junior has become one of my heroes.

I have had so many conversations about this LUVly, amazing effort. I cannot imagine tiring of talking about it, because things which are this positive, this selfless are such a refreshing change from so much else which often dominates our conversations. Any day I doubted the future, others, all I had to do was think of The Peacock Project.

I never met LUVly young Elizabeth, cannot imagine the loss felt when one loses a child. I know early on her family was a bit apprehensive about the effort, unsure others would wish to contribute, that it would come to fruition. How extraordinarily bitter sweet it must be for them today.

THANK YOU, John Michael, to your Mom, Valorie, and Dad, Donald, to little sis, Hannah, for allowing me to tag along, participate, join in, observe what has truly been one of the most beautiful efforts I have witnessed in my life. What a wonderful gift it has been.

There was a time early on when I thought The Peacock Project was such an amazing and wonderful thing to have take place in Winter Park. Over the weeks and months, I began to think that part of what I LUV about Winter Park is that this is exactly the kind of place where one young member of the community would so selflessly work to honor and pay tribute to another. It didn’t make me LUV this community more, but it stands as testimony to why I LUV it so.

John Michael, you are one amazing young man. For whatever right I have to be, I am so extraordinarily proud of you, proud to know you. What an amazing gift you have given us on so many levels.