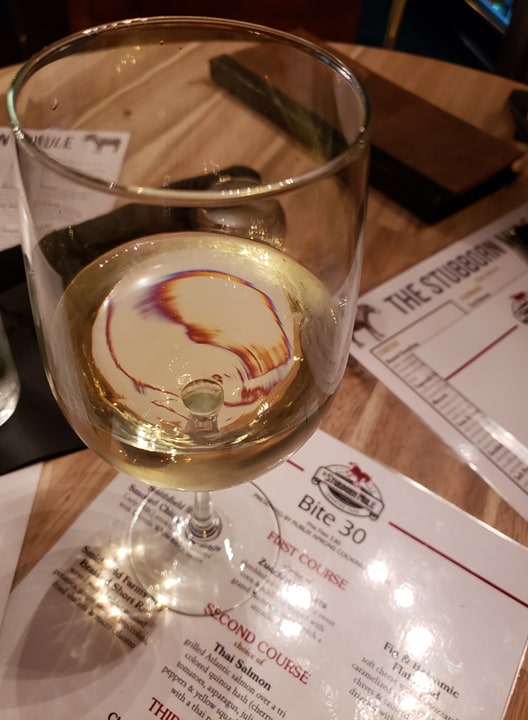 Summer isn’t yet officially here and yet, things around here have gotten quite gray and wet!

Such days make me that more inclined to find something to look forward to, even as the number of Local events in which to do so dwindle to a summery low.

All that much more reason to take part in efforts like the Orlando Weekly’s #Bite30, with $30 three course fixed price menus at a variety of Local restaurants.

Not your thing, you say? Well, I’ll encourage you to think again! My life partner and I just had one of our BEST meals of the year last evening, all because we chose to take part.

After finishing our Friday evening eat out / eat in debate, the question was then where to go? We’ve done the Bite 30 menus before, thought it worth a look. My other half did the initial selection, gave me four restaurants and told me to check out the menus on the website, www.Bite30.com. I perused the possibilities and the menu which spoke most to my cravings was from The Stubborn Mule in Thornton Park.

We arrived around 8:30 and were immediately seated after telling the hostess we would like the Bite 30 menu. Our server, John, was quickly table side ordering our drinks. Inside and out the place was nearly full, but our timing was obviously quite good.

The decor at The Stubborn Mule is charming, warm but bright, easy for servers and diners to move about without getting in one another’s way. I am especially fond of the large, somewhat pixelated and arty image of a donkey — one I’m told belongs to the restaurant’s owners — on the wall as you enter.

We placed our orders for all three courses, coordinating so that we could sample more. And the appetizers were soon on the table.

Let’s just say dinner could not have gotten off to a better start!

My wings were crazy awesome. Seriously, these were some of the BEST wings I have ever had. I don’t like making sweeping statements, as doing so can be like comparing apples and oranges, even on the same sort of item. I LUV the wings we often get at both Friendly Confines and Garp & Fuss on Park Avenue. But those wings are quite different. The wings I ate — and LUVed — at The Stubborn Mule were the CRISPIEST I have ever eaten. The flavor was delicious and, again, the crispiness, awesome. I thought there might be two or three, but instead received six. Meaty, crispy, yummy.

Meanwhile, adjacent to me: What the heck was going on? Hey, my partner and I have been together a LONG time. But this one’s no Pollyanna, not always the most positive about things. I am the sunshine-y one! 🙂 But beside me last evening, the guy who ordered the zucchini fritters for his appetizer, there was literal gushing. When he uses words like BEST, well, they’re not typical in his vocabulary. He went on and on about these fritters, was still doing so this morning. I tried them, also, and, yes, they wuz tasty!

Next came our main courses. My partner knew immediately he wanted the Smithfield Farms soy braised short ribs. I was waffling a bit, thinking of both the Thai Salmon & Tuscan Pesto Chicken. I asked for our server’s opinion and he helped me come down on the side of the chicken. The dishes arrived and the appearance immediately had us excited for this course. But also, on mine, I was a bit floored by the amount of food! There were TWO large pieces of chicken on my plate, served over “cheesy chorizo risotto”. Yes, offerings like the Bite 30 menus are supposed to be a good deal. But that often relates to getting something usually a good bit more at a lesser price AND a smaller amount of food. NOT here. Last night’s Bite 30 dinner was a significant amount of food!

The second course ended up being much like the first in that he who rarely goes on and on about something he’s ordered in a positive manner let loose with a list of super positive superlatives. This is about the time Mike, the restaurant’s manager, visited our table. His timing could not have been better for super positive feedback. My partner went on and on about how amazing the ribs were, with no fat or gristle. Oh, yes, I have sat beside him when the opposite is true. Far less pleasant. My chicken dish was also delicious. We’d both order what we had again in a heartbeat.

Next came dessert. Not the biggest dessert eaters, we were pleased two desserts we do LUV were both on the menu: bread pudding and carrot cake (triffle). Again, they were delicious!

As we enjoyed dessert, Eric, the sous chef, came by to chat and surely enjoyed the reviews. Not sure to which staff member my partner first uttered the words, but they were noteworthy to me, as I understood the rarity of them coming from the individual speaking them: This is probably the best meal we’ve had out this whole year.

Wooo! Yeah, I may be ordering an MRI for him this week, yet, gotta say, he may well have gotten it right.

Our Bite 30 meal at The Stubborn Mule was truly exceptional. Or, as we say in the I LUV Winter Park realm: #5LUVs!

Thanks crew at The Stubborn Mule and thanks Orlando Weekly!

As Arnie of Kaleefornya once said in the 80s: I’ll be back!