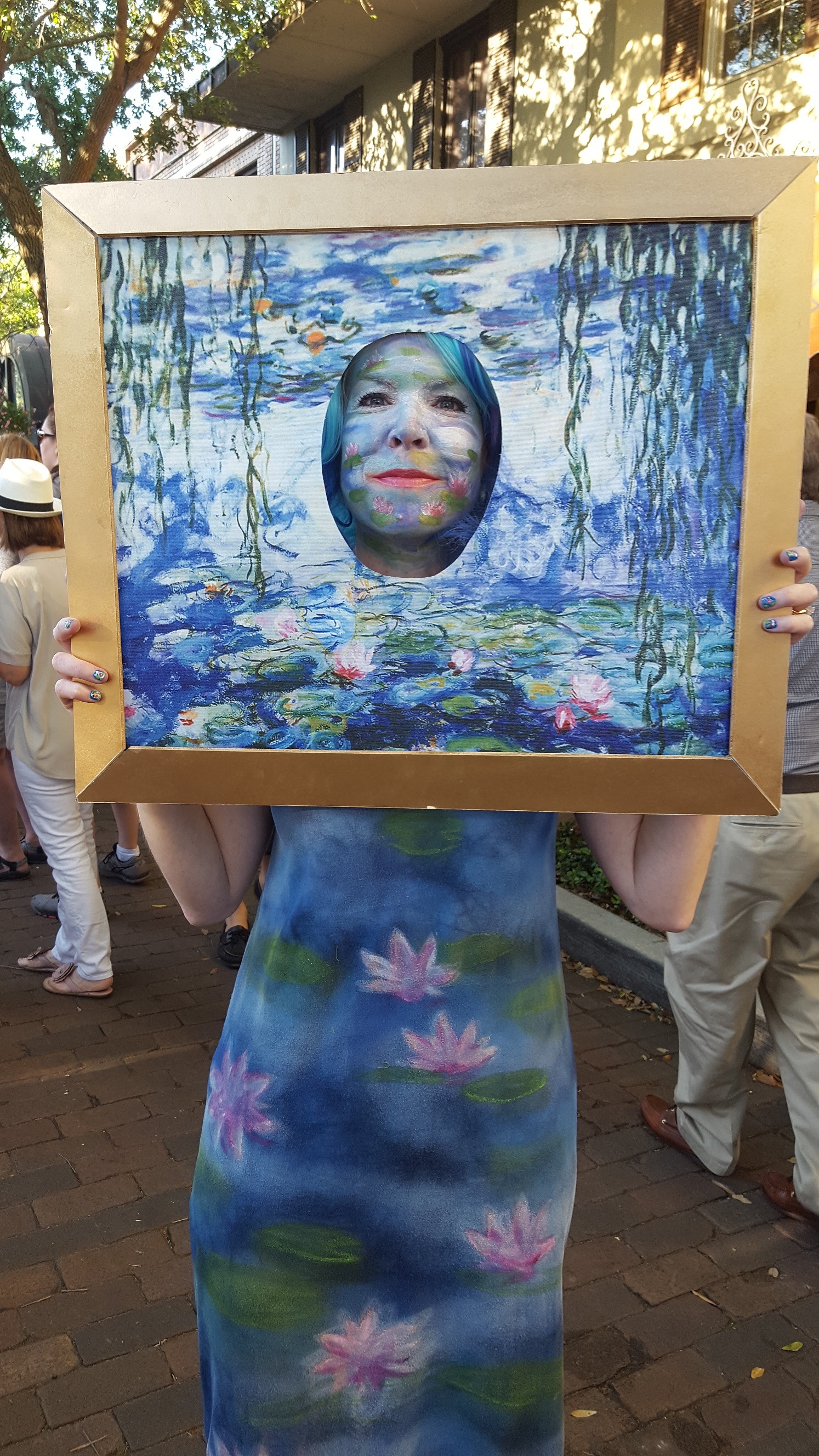 Dinner on the Avenue approaches!

Those who know me well have heard these words before: It is my single favorite night of the year, a night when Winter Park lets her hair down, dances on table tops.

Yep, this girl can party! And the AHHHmazing creativity of our friends & neighbors which is on display each year is a major treat!

Before detailing my list of favorite tables — sometimes grouped, reason explained — I will say that my personal taste for Dinner on the Avenue tables leans strongly toward the amusing and entertaining. I often appreciate the beautiful ones, but big kid that I am, I LUV to be entertained! And many of these tables were VERY entertaining!

No. 10 Stranger Things. I have LUVed both tables with this theme, one from last year and the year before. Yes, I LUV the show on Netflix. But what made these tables so great was how cleverly these groups took a complex show and broke it down to essential, instantly recognizable and easily associated images. The strung Christmas lights with the letters: GEENYOS! The first year, I remember there was something with an older wallpaper wall. So creative. So well done. PERFECT Dinner on the Avenue!

No. 9 Sharknado. This was again an example of HOW do you pull off something like this? In super, rare & bloody fashion, of course! First, there was lots of clever injuries to the participants, including sharks bursting out through their t-shirts, a la the creature in Alien! Hey, sharks can do crazy things when tossed about in a tornado! And THAT was the crazy, awesome centerpiece of the table. Imagine Marge Simpson’s hair, super tall but narrow at the bottom, wide a top. And gray. Then dotted with Barbie & Ken dolls missing more anatomy than usual. And, yes, small sharks swimming, flying, toiling about in those winds, ready to feast and feast some more! It is AWESOME to see the imaginations of other Locals at work!

No. 8 Downton Abbey. How do you make a great Brit period piece come to life during Dinner on the Avenue? Well, these guys, in addition to great costumes, also showed up with a HUGE cardboard cut out of Highclere Castle. I LUVed this photo of these two, but the Lady Dowager and he . . . I mean she . . . . looked terrific that evening! Check out the accompanying Instagram posting for that pic.

No. 7 Jersey Shore. Sometimes, when your idea is really good and really timely, yes, you are not the only one who thought of it. Such was the case years ago two different groups showed up celebrating those crazy narcissists from MTV’s Jersey Shore. This was the younger group! They actually looked a bit like they might be hanging out with the tanned Garden Staters. The second group was also a riot, and I still quite vividly remember a posing session they did for their fans. See the pic I took of them on the accompanying Instagram post, search for #ILUVDOTA.

No. 6 Marionettes / Sister Wives / Paint Faces. These ladies are unbelievable. They bring it and bring it again, year after year. They are so amazing, while I grouped THREE of their themes together here at No. 6, there is a higher placement by a theme which truly blew everyone away that year. But these three . . . . they don’t just come up with terrific ideas, but they make it happen with amazing detail, clever details. Their marionette women were fabulous, from their outfits and strings to the makeup. Another year, it was they became works of Art, as their faces appeared in well -known works of Art, their costumes a continuation of the form or style of Art work. And then there was the hysterical Sister Wives . . . . a gathering of the wives of Warren Jeffs. The costumes were flawless that year, but even more than that . . . . THE HAIR. See the accompanying image on new Instagram post.

No. 5 Carnival Cruisers. I look at this photo and I remember this group made me laugh so hard that year, I thought I might have an aneurysm. So many of the best Dinner on the Avenue themes end up being about a news story. The year these guys did this, a Carnival Cruise ship had been stranded and drifted somewhere off the coast of Florida. It was a big news topic for days and days. They had a metal railing from which they all acted as if they were on the deck of the ship. I won’t go into lots of details, but one sign encapsulates the jest of their message. I don’t remember what was being handed out, but it was on “The Poop Deck” . . . . on which someone had then scrolled “which is every deck at this point.” I truly have never laughed more at any Dinner on the Avenue table.

No. 4 Wolf of Wall Street with Pan Am Wives & Friends. Sometimes you LUV a theme. And then it gets even better. A few years ago there were two tables of guys doing a Wolf of Wall Street / Winter Park theme. In addition to other trappings of Wall Street, there was a stripper pole. Oh, what fun was about to happen. Next door to these two tables of men were their wives, all in Pan Am stewardess uniforms. And they were PERFECT. As the night progresses, Dinner on the Avenue becomes as a lava lamp, people, whole groups, moving to and fro, joining together, separating once more. That stripper pole became a magnet. Yes, I admit to doing all I could to increase the magnetism. It just so happened that next door to our table that year was a group doing ‘Once Upon A Time,’ complete with Snow White & Prince Charming, Jiminy Cricket, Cruella DeVille, Mary Poppins. And, yes, I got each one of them on the pole, in addition to Sharknado victims and others. Oh, yes, THIS is Dinner on the Avenue at its best!

No. 3 Breaking Bad. Full disclosure, I was part of this table and proud to be so! From the dry ice which made our beakers smoke & bubble, to the cash lining the table to our neighbor who showed up as a dime back filled with little blue cubes to Heisenberg and all the rest, yep, we took home Best Movie / TV theme that year for good reason! Sometimes, yes, it’s good to be bad.

No. 2 Trophy Wives. Seriously. These ladies are nothing short of amazing. With many of their other themes tied at No. 6, here they are at No 2 with Trophy Wives. Each woman was a different sports figure, completely painted in gold, a pedestal upon which to stand designating their specialty. They would move as a silent performance Artist in a park. I HATE that I didn’t get better pictures that year. And some video! I look back now in awe at what these ladies pulled together. It was extraordinary.

No. 1 I LUV Lucy. This theme was among those the first year I ever wandered down to this crazy, wonderful, super fun thing called Dinner on the Avenue. This theme was not just genius, but so amazingly pulled together. The specific episode is the one in which Lucy goes to work in a chocolate factory, ends up, of course, making the machine go to fast, tries to eat all the chocolate that’s coming at her quickly. The costumes were perfection, each woman in red wig, the perfect Lucy get up. The husbands each in white, a bandana on his head a la the male character from the show. But the cherry on top was a WORKING CONVEYOR BELT on the table, piece of chocolate whizzing around on it such that passersby could walk by and take a piece. Dinner on the Avenue doesn’t get any better than a classic piece of Americana cleverly brought to life and then inviting onlookers to join in, enjoy.

Saturday night will be the 2019 Dinner on the Avenue. I can’t wait to see what my friends & neighbors have in store for us this year!