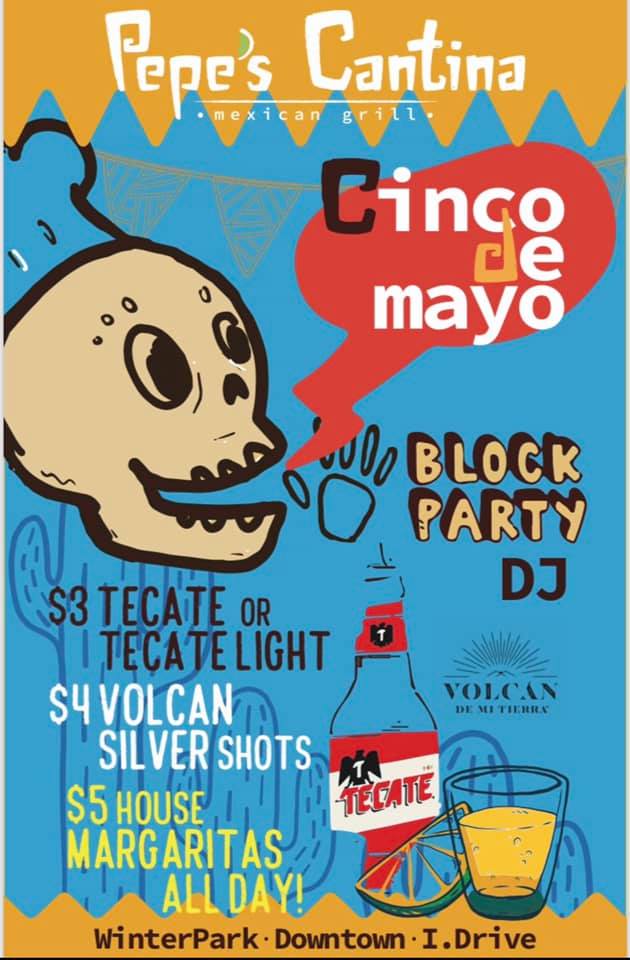 The older I get the more I find there are few feelings which can match truly believing in someone else.

Something that makes that even better?  When that person is many years your younger.  It can be quite uplifting, have the automatic capacity to excite you for the future, wondering what wonderful things generations younger than your own may contribute to it.

I’ve had a few of these experiences in the last few years.  But the latest is different from the others, with some angles which now have me LUVing this place I call home – the broader one, the United States of America – maybe even a bit more.  People from all over the globe desire to come to the U.S. for the opportunities it offers the individual, where hard work, talent and determination can pay off like no where else.  Frank Chavez is proof.

Now 26 and the co-owner of the three Pepe’s Cantinas in Winter Park, downtown Orlando and I-Drive, Frank has been in the United States not quite 10 years.  Originally from Quito, Ecuador, he says he announced to his family he’d be moving to the U.S. when he was only 12.

I became a Pepe’s Cantina fan basically from its opening in October 2015.  Tucked away a bit off the most heavily traveled parts of Winter Park in Hannibal Square, it’s comfortable and relaxed, with a back bar that remains the best kept secret in Winter Park.  I met with Frank recently to talk about Pepe’s plans for Cinco de Mayo.  As we talked, and I heard what is going on at Pepe’s and Frank told me more of his individual story than I had heard before, I knew it had to be shared.

Frank Chavez may be my new poster boy for the American Dream, that elusive ideal which motivates people to work hard, keep long hours, take risks.  Consider this timeline:  He moves here at 17, living with a guardian, his parents still back in Ecuador.  He attends Lake Brantley High School and takes his first U.S. restaurant job at Gateway to India on I-Drive.  He learned English in Ecuador, but says he really had to work at it after the move.  In less than 10 years he is now co-owner of three successful Mexican restaurants, with the FIRST FRANCHISE – also to be located in Orlando – in the works.

He has no mountain of debt to pay off from college, because his education was all hands-on in the restaurant industry.  His very first job was at 14 as a dishwasher in a steakhouse in Quito.  And every job he has had since moving to Orlando has also been in the industry.

After Gateway to India there was a very small Mexican restaurant in Winter Springs “where I learned everything.  I was cooking, cashier, cleaning, server, dishwasher, delivery guy, all in one.”  After that, a larger Mexican restaurant in Winter Springs, one similar to the size of Pepe’s.  It was at one of these restaurants that he met his wife, Melissa, also from Ecuador.  They have already been married seven years.

Next came Mi Tomatina in Hannibal Square, where he also had many roles. Originally working as a server, he left for a bit, and came back as a manager.  The owner of that restaurant, Stuart Kirban, is now Frank’s partner in Pepe’s Cantina.  As we were talking at the back bar, Stuart approached our table.

I asked him to tell me about Frank.  “I wouldn’t do all this without him here,” he says quickly. “Seriously, he’s got a good business sense and he knows how to deal with people.  And he just jumped ahead from server to partner in a short time.”

Describe Frank in one work, I tell him.  Without hesitation he replies:  Brilliant.

I ask Frank a bit later how it feels to have your business partner describe you in such a way and he replies, “It feels good” and smiles broadly again.

The more we talk the more truly impressed I am.  Frank talks of “a lot of blessings.”

I ask him what makes Pepe’s different and why it has succeeded as restaurant options in our area continue to explode.  “You don’t have to dress to come have dinner with us.  You can come in flip flops, you can come in shorts.  We’re not the you have to put on your best perfume, best outfit to go out.  On the culinary side, our salsa is made from fresh tomatoes daily, the tortillas are made from corn every single day.  Our table side guacamole.  Those things set us apart from a lot of other Mexican restaurants.”

Frank is now a vegetarian, flirted with veganism last year.  I remember that stage well and I may have teased a bit.  Hey, he OWNS a Mexican restaurant!  The new Pepe’s Cantina menu introduced in November has a wide variety of vegan and vegetarian options, accordingly.

I think that embracing of trends, whether they be food or marketing opportunities, is another reason for Pepe’s success.  Pepe’s has enthusiastically embraced social media, used it like few other businesses I know.

“I always tell people that the first thing you see when someone sits down at a table, you see their phone.  I think it’s a great thing to be out there.  We’ll have people who come in and I’ll say how did you hear about us and they’ll say Instagram, Facebook.  It is out there and it’s a powerful tool,” he says.

Pepe’s Cantina has sought out relationships with bloggers like myself, the incomparable Soozie the Foodie, Brendan from Bungalower and print media like the Orlando Weekly, which also has a terrific presence in social media.

The partnership with Soozie has especially led to some interesting efforts, like the rainbow tacos & burritos for Orlando Pride last year, purple queso for Orlando City games and blue margaritas for Orlando Magic games, as well as a new Sunday brunch and a popular mid-week event they call Wine Down Wednesday.  All efforts which lend themselves perfectly to social media.

While social media lends itself to immediate gratification and spontaneity, that is not at all how I see Frank.  Frank is delightfully old school: Solid, careful, someone willing to put in real time and effort to do things right.

Considering the amazing changes in his life from 10 years ago, even 5, I ask where he sees himself ten years from now.  “Still here, right here,” he says with no hesitation.  “I want to keep growing the restaurant and bring the people who’ve been with me since the beginning up as well, one of my main goals.”

After all else I have learned about him, those last words do not surprise me.

2 thoughts on “Poster Boy For The American Dream”