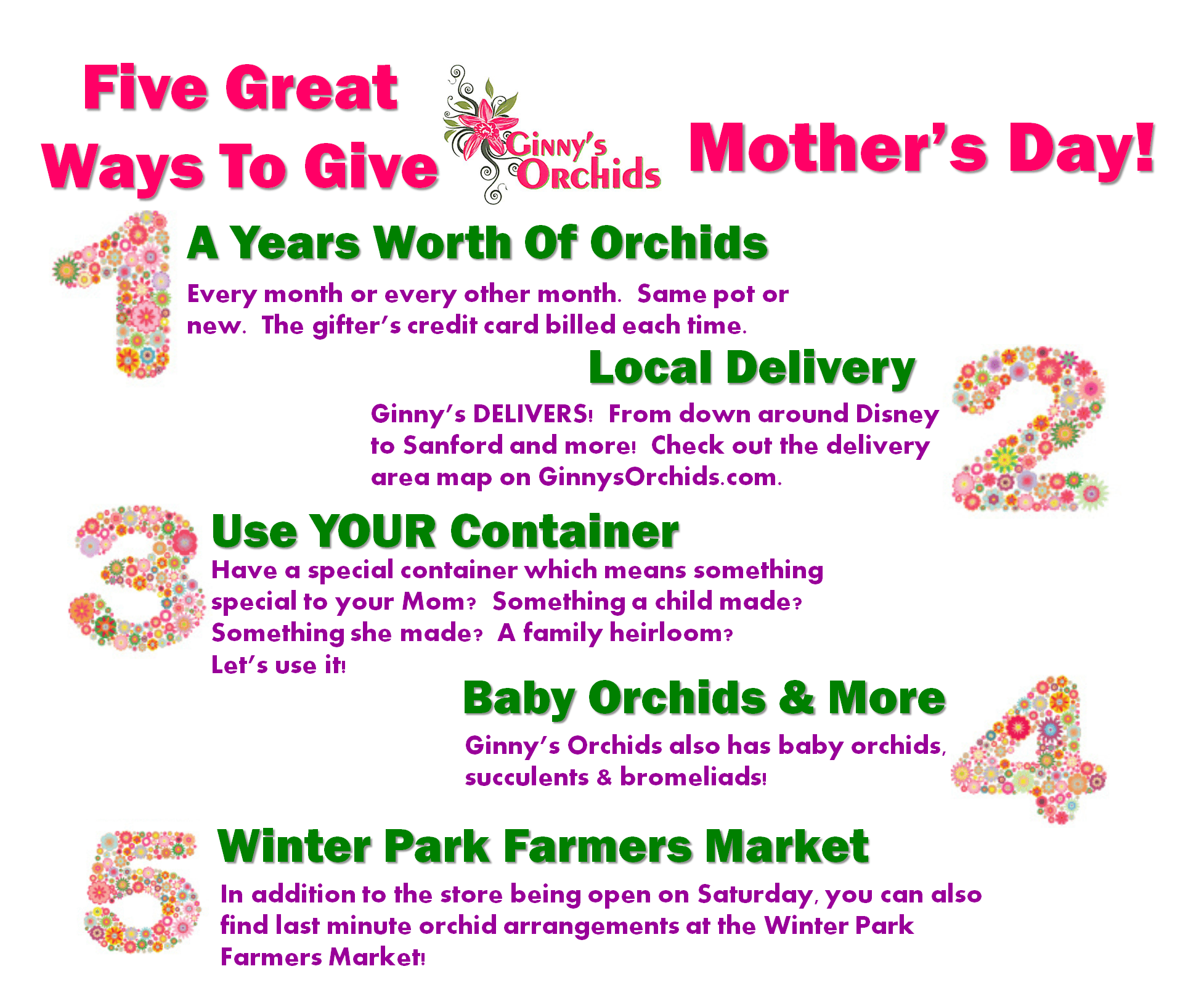 Sometimes products and the places in which they were born become entwined for eternity, one reminding you of the other.

Heshey’s Chocolate is an obvious one.  Sam Adams Beer and Boston would qualify.  Lilly Pulitzer and Palm Beach.  As the Local add to that list, I’d offer Ginny’s Orchids and Winter Park.

Ginny Enstad, the woman behind these often spectacular, always graceful, arrangements is, for me, Winter Park’s answer to Martha Stewart, the epitome of the Winter Park Taste Maker term I coined earlier this year.  Someone who sets the bar in some way Locally, someone others may seek to emulate, we look to for advice and expertise in a certain area.  Yep, Ginny across the board.

It’s a story I’ve been wanting to tell, investigate further.  Yet, it will have to wait for another day.  Because the orchid doyenne of Winter Park is also a mother.  And her orchids the mother of all Local ways to celebrate moms each year for Mother’s Day.

The origins of her business, actually, very much revolve around being a mother.  Humorously so, at times.  Motherhood was a major catalyst of why things have been “Blooming Since 1987” at Ginny’s.

“I had had my children and I was looking for something to do where I didn’t have to go to an office,” she shared with me earlier this week, as we chat in between customers at her LUVly shop on Morse Boulevard.  “I had been to the farmers market and I had some connections in Apopka for orchids, so I got on a list to display there.  And it took me two years — pretty much two years — to get in.  I had one little card table out of the back of my Volvo wagon, where if we sold 12 plants on a Saturday, we were going out to dinner!  It was a big deal.”

“I did that for years and then one day a woman approached me and asked me if I wanted to do orchids in the new SunTrust building downtown.  And my Dad always told me to say yes to the order and figure out how to do it later,” she shared with a laugh.  “So I gathered up a friend who was a florist and we figured out if I used my baby stroller – my double baby stroller – we could wheel around the bank with orchids in there.  We placed orchids and then had to maintain them.  And at this point my kids needed to go with me, so I’d put a child in the front and the orchids in the back.  I would put my kids in the maintenance closet, hide them in there under threat of death if they made any noise and I would run around watering orchids and exchanging them.  So that’s how I got started.”

That stroller was only retired in 2010 after the wheels began to fall off.  It has been immortalized, however, by Local Artist Leslie Chalfont (Giddy Paperie), in a wonderful sketch, commemorating those days, the device which made it possible.

“Then people started wanting orchids during the week,” she says, continuing to explain the evolution of Ginny’s Orchids.  “So, I set up some tables in my living room and people would call and say ‘May I come and get an orchid?’ Yes. Started with that. That went on for years.  I had orchids in my kitchen, the living room, my dining room, everywhere except my bedroom.  It just got really busy and one day I asked my husband if he would like to help me and he said I’d LUV to.  He jumped on board and we’ve been working as a team ever since.”

Those two stroller riders have also gotten involved over the years.  Son George helped out during summers between college semesters, and daughter Phoebe has worked at Ginny’s Orchids full-time during periods, doing anything and everything, including deliveries.

For this woman who has now become so inextricably tied to the products she sells, the arrangements she creates, I ask:  Why orchids?

“That’s a really good question,” she says.  “I don’t really know the answer.  I just knew they were special.  And there was one person at the farmers market who sold the corsage type of orchids, but phalaenopsis were just getting popular and people were growing them in bigger quantities.”

I ask what she as a child would get her own mother for Mother’s Day and the answer is immediate.  “Peach colored roses.  Those were her favorites.  They were called tropicana.  I would ride my little bike to the grocery store and buy tropicana roses.”

Does she give orchids as gifts now?  “Oh yeah, going to a party, a girlfriend.  Perfect gift,” she says.

Personally, I LUV orchids, NEVER throw one out, will hang them from trees in our backyard, waiting for them to bloom anew.  I have quite a few Ginny’s orchids back there in that mix. It always amazes me when I talk with others who think they are difficult to grow.  They are actually among the easiest plants I’ve ever kept.  That’s a big reason they are so perfect for Mother’s Day.

“It makes it sound like any dummy can grow one, even Martha Stewart hopped on it,” she says.  But that may be an over simplification for various reasons.  “If you have a huge arrangement and you didn’t want to take it apart to water it, you could give it just a little bit of water and it could survive on that and be pretty much okay,” she says.  “Ice cubes, not so much.  You just want them to be bone dry before you water them and then drench them.  Wait til they’re bone dry again.”

Ease of care, gorgeous color, the drama of those long stems, that the blooms are long-lasting and there’s a plant to enjoy into the future, it’s no surprise to me Ginny and her orchids are so popular, a staple in the gift arena for so many in our area.

“People LUV to tell me their stories, what they got for this occasion or that occasion and I LUV hearing it.  Lots of times they bloom at the same time of year that they got them,” she says. “It can become like a memorial if they remind them of someone.  It really brings them a lot of joy.”

“What’s fun for me is like the last lady who just came in,” she says, referring to a woman who visited during our chat.  “I know her mother-in-law so I know what she likes.  After doing it for so many years, people will call me and say – I had one this morning: ‘Oh, this is Beverly and I need something for my mother.’  And I said, oh, she’s at the Mayflower, right?  Cause I have been doing this for so long, I remember whose mother is where.  So that’s fun for me.  Or when someone calls from out of town and they want to send something to someone I already know, know what they like, that’s fun.”

For Mother’s Day, especially, that may mean two or more generations of one family will end up as customers.  And more often than that she’ll have one customer buying arrangements for both his wife and mother.

I knew Ginny’s Orchids maintains orchids in suites at the Amway Center, at the Dr. Phillips Center and in many large homes around Winter Park, but I hadn’t exactly made the connection to what they can be for Mother’s Day.  Even while it’s such a natural.

“We have clients who want to give a present to someone who has everything, so in the past we’ve done an orchid a month.  They give me a price, how much they want to spend every month and we deliver a different color every month. Or every other month.  Or they come in and pick out a beautiful pot and an orchid and then the person can bring me back the pot and we refill it with a new color and it goes on the gifter’s credit card.”

But her husband goes a different route.  “Bob will usually say on Saturday afternoon, right before close: ‘Okay, hon, pick out anything you want.  He thinks he’s hilarious.”

Thanks for all the beauty you bring into our lives.