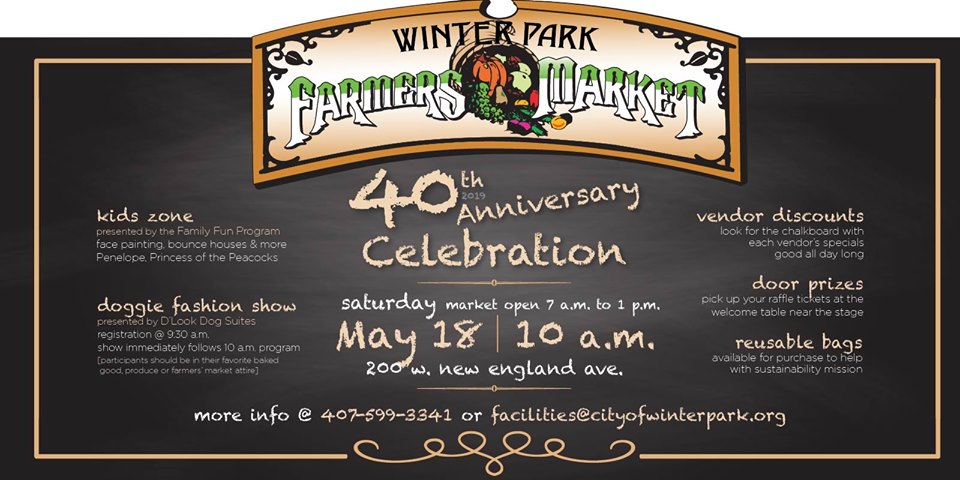 I knew of the Winter Park Farmers’ Market before I’d ever visited Winter Park. A delightful neighbor in Fort Lauderdale spoke so fondly of Winter Park, told us we should check it out. The Farmers’ Market made her best of-list, as she reminisced of eating bagels there on Saturday mornings, of wearing her sweater sets and boots there in the winter. Memories are about the details.

Now here for almost 13 years, its part of my Saturday morning routine at least a few times each month. Those Saturday mornings provide opportunities for deals on Local plants and produce, but there’s also a LUVly energy, a spirit of community which is priceless. You’ll see people you know, meet others, a meet and greet as Local as most of the goods available for sale.

As the city prepares to celebrate 40 years of this Winter Park tradition, there’s only one guy who has been there since day one.

Earl Wilson was one of the original Winter Park Farmers’ Market vendors from that first Saturday morning 40 years ago His Early Wilson Tropic Decor is still there, each and every Saturday. The Market is different things to different people; for Earl, that includes life changing experience.

“I was growing plants in my backyard, selling them. I lived in Orlando and I would go down south and I would buy palms, set them up on the street corner. I was 24 years old, you know, and I was doing it in my spare time because I was working full time,” Earl tells me this week at his offices in Apopka. “I worked for a dime store – McCrory’s 5 & 10 – and I wasn’t making enough money for a wife and a child. So I thought I’d do this on the side. And then my Mom handed me this thing and said, hey look, they’re going to open up a farmers’ market in Winter Park. You oughta check that out. I said I will, I will. And that’s how hit started.”

Life-changing,? “Oh yeah, it was. It put my face in front of people and it opened up a lot of doors for me.”

Taking on an entirely new career, I’m curious how he did it. We rely so heavily on the internet now, but there was no internet in 1979.

“You ask a lot of questions. You go around and look, you retain the knowledge. You visit nurseries and you see what they’re doing,” he tells me. “That’s how I did it. You know, I actually grew up with – my family was farmers in South Carolina. In the summer I would go and spend a summer on a hundred acre truck farm in South Carolina. So I knew about picking peanuts and pulling watermelons and that type of thing. And I LUVed growing plants. When I was a kid in Winter Park I would grow pumpkins in my backyard and take them around at Halloween and sell them in a wagon, knock on peoples’ doors and say, ‘Hey, you wanna buy a pumpkin?’ Instead of cutting peoples’ grass I was selling them pumpkins.” He takes me around the office showing me aerial shots of their continual growth over time.

Earl speaks fondly of his childhood in Winter Park, tells me of walking the Dinky Line, how he and a small group of friends would jump from diving platforms which used to exist at Rollins College along Lake Virginia. He attended Brookshire Elementary, Glenridge Middle School and Winter Park High. He sells plants at the Farmers’ Market, but also does yard maintenance for over 350 homes in Winter Park each week. And if you don’t see what you want on a Saturday, more than likely he can get it.

I joke with him about a now ENORMOUS Chinese fan palm we bought from them six years ago, obviously from the Jurassic era. A few years after that they installed a number of bamboo plants which have become a jungle-like wall. He humors me answering some of my gardening questions, about plants which never go to seed and where they come from. “Well, the original, God,” he proclaims and we both laugh.

The first markets in 1979 included a few vendors outside, but the rest were all indoors, he says. He says it’s a lot different now, including that the parking lot is paved, shows me a matted photo of the a puddle-filled Winter Park Farmers’ Market from more than 25 years ago.

“When they renovated the market they said we’d really just like to have food inside,” he says. “And I said, okay, that’s fine. They let me pick what I wanted on the outside and that’s what I did. And I set it up more so that you walk through everything instead of a table where I’m standing behind. I wanted the customers to come in and walk through everything.”

I then ask a question which provides a stunning answer. What time do you get started each Saturday morning? “We leave at 2:30 in the morning.” He says this so matter-of-factly, as if I should have anticipated such an answer, continues, “and it takes us until seven to get it all set up.”

Do you go to bed at all? “Yeah, I go to bed about 8 o’clock.” No partying that night? “No we don’t party on Friday nights. Saturday – if you can stay awake – you can. In the beginning it was just me and my wife running it. And I had a smaller truck. So I would have to work Friday night, and take two loads to the farmers’ market, come back to my house, load my truck and then go to bed. But I wouldn’t really go to bed, because then I would never get up. So I would lay on the living room floor.”

These days market efforts are mostly facilitated by son ‘Early’. There are now four Earls total, Senior is ‘Poppy’, Earl, his son Earl who they call Early (which so fits his Saturday morning schedule) and Early’s son, ‘Quattro’. “I started back doing it last year,” says Earl. “So I go and help them at least three weekends a month. All the cops and the 7Eleven that we stop at, they can set their watch on Saturday morning to us as we have a line of trucks going down to Winter Park.” Poppy is now 96 and regularly attends the Saturday market. Yes, 96.

Their “convoy”, as he calls it, includes three 24 foot box trucks and another 14 feet. Trucks are loaded all day on Friday. They rise at 2 a.m. Saturday morning and hit the road at 2:30. I say it all sounds like an amazing undertaking to do each week and Earl tells me it’s all about “logistics”.

I joke about the feeling of déjà vu they must get and he laughs. “And we don’t care what the weather’s like. We’re ready to go.” He talks of a few weeks ago when it rained all day, the fewer number of vendors who participated that morning. “Everyone didn’t come,” he said. “But we were there.” I consider the amount of time and effort involved, the ease with which weather can change significantly over such periods.

“You never know,” he says. “It’s never a complete failure. People know you’re there and they come looking for something.”

I ask if he has a favorite memory from the market over these 40 years and he soon responds, “I would have to say the first day. I mean, I was happy with what I did. And it was something I thought was going to be worthwhile doing. That would have to be my favorite day. From then on, it’s just been great. It really has. It’s just a little business, but the people I’ve met, the things I’ve done, the jobs I’ve gotten from it, it’s just a great thing.”

Poppy came to work with him around 30 years ago after retiring from McCrory 5 & 10 himself. Early “did something else for a while, but came back. When we was real little we’d make him get on the top shelves of the trucks and push the plants out.” He talks of his oldest daughter, “she’d go with us at 2:30 in the morning and we’d make her a bed on one of the tables and she’d sleep on the tables while we were setting it up.”

Moments later Earl’s wife, Cookie, enters the room. They just celebrated 41 years of marriage, and she was there with him from the first days at the Farmers’ Market. “As we started a family,” she says, “I said how about I stay here and do all the watering and you get up at 2:30 in the morning and go to the market? Getting up at two o’clock in the morning is what almost drove us apart!” We joke about that for a bit, laughing.

Earl brings up my question about favorite memory again, and says it’s been funny that all three of their children have been born on Saturday. “All of my children were born on Saturday,” he laughs, including one in which he seriously dropped his wife off at the hospital on his way to the Farmers’ Market. Says Cookie, “I’m in the truck and I yell: My water broke!”

Earl dropped her off and continued on to the Market. “I had all these planets, you know, I had to get them to the market,” he says, laughing. Later that day their doctor “came down to the farmer’s market to tell me I had a boy.”

The Winter Park Farmers’ Market has truly been a family affair for them. “We’re all involved in it now.”

A few years ago I coined the phrase Parkpreneur to describe all the people who make Winter Park special, unique. Earl Wilson is without question such an individual.

Join us tomorrow as the City of Winter Park, Winter Park Farmers’ Market fans and vendors celebrate 40 years of this wonderful Local tradition.